My introduction to the Isle of Man came a few years ago via a short-lived reality-TV show called King of Mann in which someone from Maryland claimed to be its last hereditary king and moved there to establish his claim. It was fun to watch, primarily because I never expected to see this part of the world in person.

Earlier this month, I got to visit! It’s a lovely place, with both Celtic and Viking roots, where you can see mountainous terrain covered in heather and mist, and rugged coastline guarded by castles and lighthouses. It’s known for a world-famous cross-country motorcycle road race and the tailless Manx cat, and represented by an unusual flag. It’s parliament, the Tynwald, was established by Vikings and is the oldest continuous one in Europe. 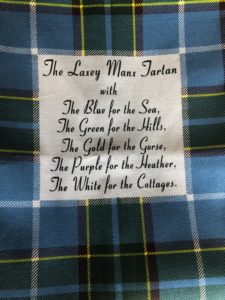 It also has a lovely, romantic tartan.

If you ever get the chance to visit—and don’t think it could never happen—go!