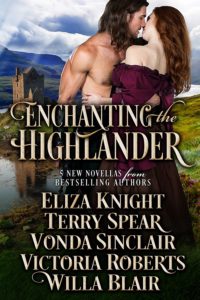 Enchanting the Highlander is only available during November—then it’s gone forever.

So get your copy for only 99 cents today!

Each novella will be sold separately for a higher price. Instead, get them all for 99 cents in one volume at your favorite bookseller:

CELEBRATE THE RELEASE WITH US!

And join us at tonight’s ENCHANTING THE HIGHLANDER Release Day Facebook Party! (You must be on Facebook to participate.) Join the authors from 6:00 – 8:30 p.m. EDT November 1st! There will be fun and games and prizes there, too! 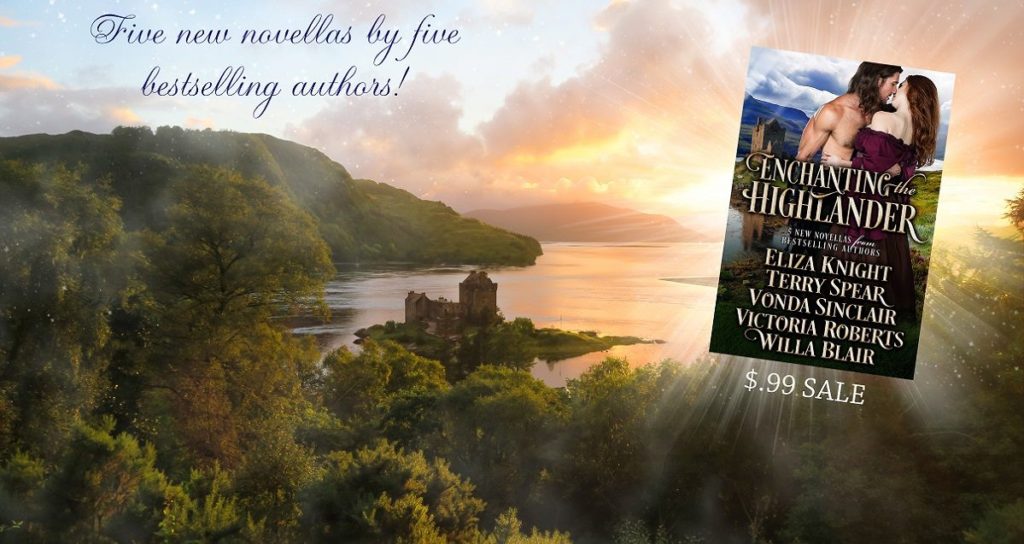 Check out the stories in Enchanting the Highlander!

PROTECTED BY THE LAIRD by Eliza Knight — When she needed a champion, he raised his sword…

While besieging an enemy castle, Laird Douglas Hay comes across the half frozen body of a lass. She’s obviously one of the enemy, but he cannot allow her to die. Besides, as his captive, she could bring a hefty ransom. He revives her, a task easier managed than her fiery temper, and the intense desire heating his veins.

Taken as a prisoner by the brutish warrior, Lady Annora Comyn is determined to make her escape. Secretly, she believes that the war between the Comyns and the Bruce is ridiculous, that the vying for the crown should have died the day her royal brother was murdered. Annora struggles internally with the notion of letting men fight their battles, or putting herself forward as collateral in a treaty to unite the warring Scots. After all, there are far worse things than having to kiss Laird Hay everyday for the rest of her life.

VEXING THE HIGHLANDER by Terry Spear — Saving the king’s life has unforeseen consequences for one Highlander and a lady, the king’s ward…

Lady Aila MacIntosh hopes she doesn’t regret the king’s marital choices for her and her sister, but because of her cursed red hair, she hasn’t had any interest. Until one braw Highlander bumps into her at the king’s gathering. He seems just as taken with her as she is with him, until she learns he is but a commoner, brother to a lord when she is a lady. The king would never make a match between them.

Alban of the Clan Daziel meets the most beautiful woman at the king’s court, only he soon learns she is a lady and quite out of his reach. But when the lady and he meet under rather awkward circumstances, they chance to overhear a plot to assassinate the king. From then on, their lives spiral out of control, and losing his heart to Aila is only one of his pressing concerns. Protecting her from those who wish the king dead—his greatest.

When Lady Mairiana MacKerrick witnesses her fiancé, Alec Lindsay, committing a murder three days before their wedding, she decides she must run away. Darack Grant, secretly an outlaw MacGregor, is on a clandestine mission at the Lindsays’ castle, but when he finds Lady Mairiana hiding in the stables, he knows he must help her escape.

Darack remembers the beautiful Mairiana from their one meeting a few years before. Though he was drawn to her, he always saw her as far beyond his reach. Mairiana, finding an inner strength she never knew she had, throws caution to the wind and trusts the Highland renegade to protect her on their journey through the Scottish Highlands. On the way, they discover a shared, astonishing passion. But Alec will stop at nothing to reclaim his betrothed and destroy Darack in the process, even pin a murder on him.

Sorcha Gunn has realized the error of her ways and wants to make amends for everything she’s done. But when her cousin mysteriously disappears and Sorcha suspects her father is responsible, she needs to make a choice: betray the man who has given her everything or seek help from his enemy. Her decision is not an easy one, especially when the only person who believes in her is a brawny Highlander from the neighboring clan.

As captain of the MacKay guard, Doughall Forbes will do anything to protect his clan from the ruthless Gunn laird. The last thing he needs is a wily female luring him into a nefarious trap. But he believes Sorcha, even though he can tell she’s holding something back. He’s determined to help her but soon discovers he’s the one who needs protection…from losing his heart.

Iain Brodie is a fierce warrior and passionate lover, but to prove he’s responsible enough to follow his ailing father as the clan’s chief, he must give up the lasses and find a bride—quickly. He doesn’t expect to fall for any of the Rose chief’s three daughters, but he can’t get one out of his mind—or heart—even when he discovers she is not who she claims to be.

Skilled rider and archer Annie Rose values her freedom. She doesn’t want to be anyone’s bride, not even deliciously and annoyingly sexy Iain Brodie’s. But her father wants an alliance with Iain’s clan and he’s chosen her to forge it. Unaware she could be sealing the fate she desperately wants to avoid, Annie falls under Iain’s seductive spell at the spring known in old tales as the fairy pool.

Don’t wait to get your copy of Enchanting the Highlander—remember, it’s only 99 cents through the end of November, then it’s gone forever.

Get your copy today! 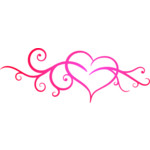 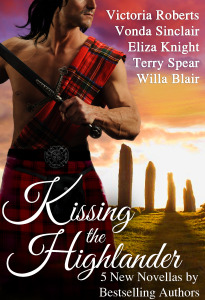 And if you haven’t read our first volume of novellas in Kissing the Highlander, you’re in luck!