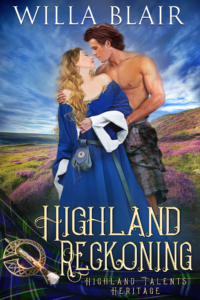 Drummond Lathan has never wished for any form of the strange talents that curse his mother’s bloodline. Serving as his father’s advisor, negotiator, and second in command, his position as Lathan heir and his highly honed skill as a warrior garner him more than enough attention without the added burden of the hushed whispers his talented siblings have to bear.

Morven MacComas knows the destructive power of whispers. A year and a day after handfasting, her husband denied her and disappeared, leaving her disgraced and brokenhearted. When she discovered he also left her pregnant, she vowed that there would be but one love in her life—her child. Years later, even as she struggles to deny her attraction to the visiting Lathan heir, Morven fears his recent arrival is somehow linked to a daring daylight raid on her village. Along with cattle, reivers have taken her young son.

Drummond has always had a knack for finding lost things, but believes his success is simple good fortune. As the attraction between Drummond and Morven grows, his heartfelt attachment to her becomes a bond that could lead to the boy—if Drummond can accept that his talent is real and valuable. And if Morven can allow herself to trust in love again before her son is lost forever.