I hope you enjoy this “hot off the keyboard” new scene. I’m sharing it now to pique your interest in a new series about the children of Toran Lathan and the Healer Aileana from HIGHLAND HEALER (Highland Talents Series). This will serve as the prologue to the first book, HIGHLAND PRODIGY (Highland Talents Heritage Series). And just wait until you meet Jamie all grown up! You’re going to love him. In the meantime, I hope you enjoy reading about wee Jamie, named, of course, for Toran’s closest friend.

Healer Aileana, wife of Laird Toran Lathan, hiked up her skirts and chased her young son across the flower-strewn ground. Spring was turning to summer, filling the glen with color. The perfumed air was a lovely change from the smells of people and animals inside the keep, as was the hum of bees replacing the clang of the blacksmith’s hammer.

This chase was a game they’d played often in the meadow below the their home, the Aerie, since wee Jamie learned to walk—and to run. He was happiest outdoors, while his slightly elder brother and sister triplets preferred to be in their nursery along with the twins, another lass and lad who’d arrived almost two years later and now spent most of their awake time terrorizing the nurse.

Aileana cherished the time she spent with each child, determined to give them the individual attention any singly-born babe would have. With wee Jamie, the time they spent in the glen formed a special bond between them. Yet she could not coddle her youngest of the triplets—not for much longer. They were growing so fast!

Aileana sighed and glanced around. From the edge of the nearby wood as well as from the Aerie’s ramparts, Toran’s men guarded her and her son. They were safe, the sun gilded everything. Wee Jamie’s laughter as he turned and danced from one foot to the other on his four-year-old legs, waiting impatiently for her to catch up, made Aileana grateful for the happy perfection of her life.

“I’ve got ye now, laddie!” She scooped him up in her arms and twirled him around, grinning at his squeals of delight. When she set him down, he held out his hand for her to take, and they walked companionably back toward the trail that led up the tor to the Aerie’s gates. Along the way, she pointed out different wild flowers and named them.

When they reached a clump made up of several different shades of blooms, she asked, “Which do ye favor?” The lad was showing signs of a strong personality, and she wondered if he’d begun to develop preferences beyond the scope of what he liked to eat or to wear.

“That one,” he said, pointing.

Ah, bright yellow on stalks, some to his waist, the vetch caught his eye.

Aileana’s eyes widened at that. His triplet sister had been sick months ago. Jamie should still be too young to recall that so clearly, much less what she’d used to help her second-born get well. “Very good, my wee laddie. Ye have the right of it.”

“’Tis a vetch,” she told him, maternal pride spreading warmth through her at his interest, yet a touch of sadness hollowed her belly as well. She used the lore to treat the sick and injured as they would expect from any healer, with herbs and poultices and tinctures and the like, yet she often sped their recovery with her talent, especially if it was needed to save them. If her son learned the lore of herbs and other plants from her, perhaps he would one day become a healer, even without her talent.

Could Jamie become a male healer? Or should she forget such a fanciful notion and give him over to Toran when he came of age to train as a warrior and to foster away from the Lathan clan. Wee Jamie would never be the healer she was and that Lianna and her younger sister could be, though she did not expect to see signs of her ability in her daughters for years, not until they shed the first blood of womanhood. But their ever-curious brother Jamie could still do good in the world. There were men enough to fight and kill. Perhaps this son could help balance against them.

She showed him a few more flowers and told him what they were called and how she used them, surprised when he identified another on his own. If he recalled her lesson of today, she’d think seriously about how best to train a lad in a skill mostly held by women. Other than her mother, Aileana had yet to meet another with her talent, but village women passed healing wisdom from mother to daughter, as her own mother had done.

She knew better than most that all fighting forces needed healers, during and after a battle. It was why she’d been kidnapped from her village and carried along with the lowlander army until Toran rescued her, defeated the invaders, and made her his bride. Aye, Jamie must learn to fight, but he could also learn to care for the wounded, as much as he could without her talent. She’d let wee Jamie’s curiosity and interest guide her decision. Unlike her eldest son, Toran’s heir, wee Jamie had years yet before his future would be a set path before him. Indeed, she realized, he could train as a warrior and a healer, if he wished. That decided, she looked up and realized he’d wandered away from her, chasing butterflies again.

Instead of moving toward her, he turned to face her and held out a hand. “Mama, come look.”

“What have ye found, Jamie?” She hurried toward him, not so much concerned as curious. Save for a bee sting, there was little that could harm him in this glen.

When she reached him, she was not at all surprised to see a common meadow brown butterfly resting in his open palm. “’Tis pretty, laddie,” she told him.

He shook his head, his expression going stubborn. “’Tis no’. ‘Tis hurt, like the one ye found the last time we came here.”

“Hurt?” She hadn’t noticed until he mentioned it. “Let me see if there is aught I can do.”

Aileana gave him a sympathetic smile. “Nay, Jamie, I dinna think ye can do what I did for the wee thing. See?” She traced a finger along one wing. “’Tis broken, right there. I’ll mend it.” One wing was indeed folded in half, the clean break meaning the beauty would never fly again. A death sentence, certainly.

“Nay, momma. I ken what is wrong. I’m old enough. I will do it.” He touched the wing with one finger.

“Gently lad,” she murmured, her fists clenched in her skirts to control her impulse to take the butterfly from him before he did it more harm. He wouldn’t mean to, but delicacy was usually beyond a child so young. Surely once he looked more closely at the wing, he’d give it to her.

She watched with pride the concentration on his face as he softly unfolded the wing, then cradled the break between his thumb and forefinger. His eyes closed and his lips compressed.

“Dinna crush it,” she cautioned.

After another second, time enough for her to wonder if the butterfly objected to its injury being handled by her child, no matter how carefully, Jamie opened his eyes, lifted his fingers away from the butterfly’s wing and held it up on his palm.

Aileana’s mouth fell open as the butterfly shook out its newly healed wing and took to the air, joining the fluttering mass circling near her surprising son. How could he have her talent? A lad? And at such a young age? She took a deep breath, hoping to calm her suddenly racing pulse.

“I did see! ’Tis very good, Jamie.” She bent and hugged him to her, whispering, “That butterfly owes ye its life,” then released him as he squirmed away.

She lifted a hand to her pounding chest as he turned to watch the creature he’d helped, certain he knew exactly which one it was. Her heart was fit to burst from her, whether in shock or delight, she couldn’t yet decide. Likely both. She would have much to do to teach her son as she’d been taught to bear the burden of healing as she did, but even more, to keep him safe in a world that distrusted anyone with her talent. Some might call her a witch, though none among the Lathan clan or their allies would do so. What would strangers think of a lad who could do the same?

“Come along, now. ’Tis time for supper. And I wish to speak to yer da.”

“Will ye tell him I mended the butterfly? Will he be proud of me? Can I tell him? He’s proud of ye and ye can do it.”

“I will, aye, and he will, and ye may tell him in private.” She knelt and captured his gaze. “But ye must tell no one else. ’Twill be our secret for now. Can ye do that?” He’d shown maturity beyond his years. Could she trust in that?

Jamie stuck out his lower lip.

Ach, her almost-four-year-old was back.  She stood, took his hand, and started up the path that climbed the tor to the Aerie’s gate. “I’ll see if cook made any of yer favorite sweets. Will that be reward enough for yer brave deed?”

“With honey and cream?”

“I suppose ye have done well enough to deserve them, too, aye, but only if ye dinna tell anyone save yer da.”

He nodded somberly. “Aye, that will do.”

In that moment, she knew her wee lad would grow faster than she wished, but that he would be all the man she could hope for—and more.

Until Wee Jamie Lathan’s story is ready, why not re-read his parents’ romance? 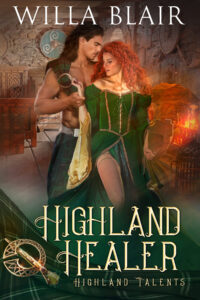 HE NEEDS HER FOR HIS CLAN.
HE WANTS HER FOR HIMSELF.
CAN HE HAVE BOTH?

Toran Lathan never expected to become Laird, and never expected to meet a woman like Aileana Shaw. Her healing ability is just what his people need, but Toran cannot resist her beauty. Yet will loving him destroy her ability to heal?

Aileana Shaw has a healing touch – and a special talent she must keep secret. Stolen from her home by a marauding army, she’s kidnapped again by the Highland Laird she heals. Is she a prize of war, or the prize of his heart?

While Toran battles the invading lowland army, he also battles his desire for Aileana. And Aileana must decide if she can trust her secrets to this fierce warrior who needs her talent, but wants her love.