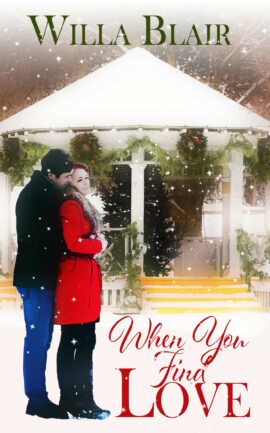 When Scottish antiques appraiser Caitlin Paterson accepts a commission in the Hamptons, ’tis the season for Christmas miracles. Too bad she doesn’t have one handy.

Successful businessman Holt Ridley resents being forced by his great-aunt’s bequest to winter at the family estate he has hated since childhood. Still, the enticing appraiser he finds there is an unexpected holiday gift—or is she?

Among the furnishings Caitlin is tasked with appraising, she discovers the key to centuries-old heartache that plagues Holt's family. Caitlin longs to help Holt find the happiness that eluded him his entire life—but this secret could destroy everything.

The first thing Holt noticed was the height of the ceiling. It soared twenty feet, the cavernous space filled with a large, sparkling crystal chandelier. Ostentatious, he thought, especially for a place referred to as a beach cottage. Smooth black and white tiles laid on the diagonal drew the eye down a long hallway to large windows, or perhaps French doors, leading to the back garden, lush mounds of green punctuated by bright pops of color. The blues of water and sky peeked through gaps in the landscaping. Pocket doors lined the hallway left and right, open and giving glimpses of the rooms within, except for one set. Walnut, he surmised, the closed doors dark and rich against pale walls.

Holt tensed, startled as Farrell’s voice intruded on his inspection of their surroundings. “Is there an office?”

“There is, but perhaps you’d like a chance to rest, have a meal?”

“No, thank you. I’m only here to inspect the property. I’ll leave my case in the office, then you can show me around.”

Farrell’s mask of noble servitude cracked for just an instant, the line of a frown appearing between his brows, quickly smoothed away. Holt wondered what about his request disturbed the man.

"Very well," Farrell replied evenly and gestured toward the closed pocket doors. “In there.”

The doors glided open soundlessly. Farrell waved him forward with an open hand. Holt let his gaze rove over the space before he entered. Sheer curtains softened the shaft of sunlight piercing a part of the gloom. A heavy desk centered on an ornate oriental rug dominated the side of the room nearest the window. Dark paneled walls and velvet drapery on the large single window created a deep sense of quiet.

Opposite the window, a large wall unit stood, doors open. Snug, black pants-clad legs extended from inside onto the floor, then to crossed ankles, and the soles of narrow shoes. The rest of her, for Holt was certain only a woman could boast those delicate ankles, was on hands and knees inspecting something inside the cabinet. He cleared his throat.

The woman’s torso jerked upward. A thunk, followed by a mostly unintelligible string of grumbles in an otherwise charming accent, filled the air. She backed out of the cabinet, pert rear then curved hips to a tiny waist, on knees and one hand, the other hand rubbing the back of her head.

“Your pardon, miss,” Farrell intoned from behind him.

“Farrell, how many times do I have to tell ye, dinna sneak up on a lass like that?” she complained as she turned, saw Holt and dropped her hand from the back of her head to her mouth. “Oops, sorry.

Her comment to Farrell and her position in the cabinet suggested to Holt she was from a cleaning service the estate used. “And you are?” Holt kept his expression neutral, but it took effort. The view from the front was enticing. Large dark brown eyes in a perfect oval face, fair skin, dark auburn hair in a disarrayed pixie cut and a chest designed to counterbalance her nicely curved bottom half. But her expression was so chagrined, he had to stifle a laugh. He saw no reason to embarrass her further.

“Caitlin Paterson,” she replied from behind her hand then dropped it to her side. “And ye are?”

“This is Mr. Holt Ridley,” Farrell announced over Holt’s shoulder. “The heir. Mr. Ridley, your appraiser.”

“Ach, I thought I’d have more time,” Ms. Paterson muttered under her breath, half turning to glance back toward the wall unit she’d just exited, then casting a narrow gaze on Farrell.

Holt was certain she hadn’t meant for that comment to be overheard because she colored when her gaze moved from Farrell to him, and she saw the quirk of his lips. “Interesting to meet you,” he chided with a glance toward the floor of the open cabinet, then back to the roses staining Ms. Paterson’s ivory skin.

This was the expert antique appraiser the lawyer had promised would make a full and complete assessment of the contents of this overblown mausoleum?

“Sorry. I was looking for a maker’s mark in…well, I have no’ found it yet.”

“You will have to continue your search later, Miss Caitlin,” Farrell interjected. “Mr. Ridley has need of the office.”

She huffed and planted her fists on her hips, then, with the heir in the room, must have thought better of arguing. She turned and closed the cabinet door. “Let me know when ye are done, if ye will,” she requested and with a nod to each, strode past them and out the door.

“Young, isn’t she? Yet she’s the appraiser?” Holt couldn’t wait to hear how Miss Caitlin had developed her expertise.

Holt thought about the view he’d gotten when he first saw the room and decided highly recommended didn’t begin to describe her. 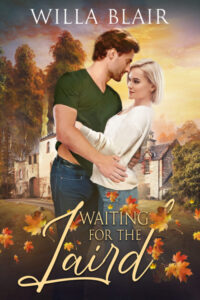